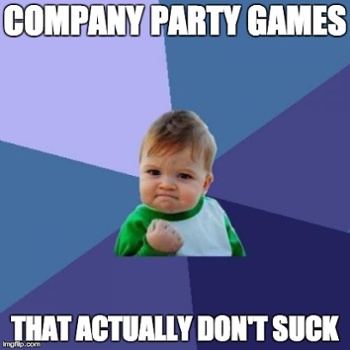 An office party is an occasion that doesn’t make many people excited. Wonder why? Well, these parties usually lack those interesting elements that make an event enjoyable or memorable. Most workers usually don’t know people outside their branches or departments. They simply try to get through the event and leave the premises as soon as acceptable.

Have you ever tried to change the structure of your office parties? Yes, we are referring to none other than company party games that can help everyone have the perfect evening. No matter whether you have to plan the annual summer picnic or celebrate your company’s anniversary, it is better to come up with a few convenient ideas to keep things smooth and enjoyable.

We have put a few company party games together that your employees would love to be a part of. Use these gaming ideas to give an exciting touch to your company party before it becomes a complete dud. Don’t forget, most games are more fun if there’s some sort of reward involved. Try gift cards to the local deli or five dollar bills. Also, check out our bonus prize idea at the bottom of this article for a real motivator!

This group game can reveal a lot about your colleagues. Each participant will have to tell three facts about themselves. Out of these three facts, two will be true, while one will be a lie. All other members will have to guess which one is a lie. Whoever guesses the most correct lies, wins the game.

Don’t want to tell your coworkers the facts about your personality? Well, here’s another game for your company party. In addition to being a fun activity, a scavenger hunt can enhance creativity and teamwork. Create a list of hints based on the history, policies, and other particulars about your company. Form a trail to enable every team to find the next clues. Don’t forget to arrange a prize for the group that completes the task first.

Think piñata is simply a birthday game? Use this game to make your next company party more entertaining. You’ll be surprised to know that it’s a great stress-relieving game for adults. Get a standard piñata from any store and get it stuffed with items employees actually love: five dollar bills, full-size candy bars, gift cards to the local deli. Arrange a solid object like a bat to strike the piñata. Ready to hit the piñata with all your might?

It’s time to determine how well your coworkers utilize their sense of touch. Put various kinds of items in a single bowl. You can pick soft balls, unusual objects, slippery toys, or other strange items. Blindfolded participants will have to reach in and determine the item they have touched.

Prepare two groups of animal cards and distribute them among all participants. Each player has to act the part of their card and find his or her corresponding animal. The fun part is that you are not allowed to communicate verbally while playing the game.

Discover the music lovers in the office. Pick different songs before the party gets started. Play a small portion of every song. Participants will have to write down the artist and title of every song. The player with the most right answers will get the prize.

This is self explanatory but here goes anyway. Divide all employees into 2 groups. Make each group hold one end of a long, solid rope. Both groups will have to pull the rope from their respective sides. The team that falls will lose the game.

8. Do as the Leader Does

Pick anyone in the party as your leader and watch him or her closely. As the party gets started, you’ll have to copy the actions of the leader. You’ll want to pick an outgoing soul as the leader, and ask them to get creative. Perform a few fun actions to help everyone loosen up.

All employees of your company might have enjoyed this classic game during their childhood days, but to tell you the truth, this game never gets old. Arrange a few seats in a chair facing away from each other. Keep one less seat than the number of employees participating. And start the music.

Outdoor fun is the best form of entertainment. After all, this is the best time employees spend with their families as well as coworkers. A barbecue sounds tempting, right? Get it arranged. Rent some Air Bounce Castles and Slides for young kids. How about setting up a few rounds of frisbee or a corn hole tournament. Other lawn games like bocce ball and washers are always a crowd favorite.

If you have a small to medium-sized company, this is a fun take on a pretty traditional game that costs less than $10 to buy, LCR. Instead of just passing the dice to the left, right and center, give each player three one dollar bills to pass. This will be an exciting game of chance where real money can be won! The last player could end up with a good amount of money to go buy something fun with. You provided the three dollars and everyone’s chances are exactly the same, so no hard feelings, just pure excitement as those dollars get passed before your eyes.

Sure, you could go with a company logoed handbag or mints, but why not give people what you know really motivates them? This is just an idea that we have seen work well, but we understand not all companies can do it, so just consider it. Why not have a variety of blank, sealed envelopes filled with varying dollar amounts… most of them can be $5 bills, but have a few $20’s and maybe one or two with slightly more. This will motivate and excite your team, trust us.